While not as radical as natural wine in its impact on taste, biodynamic wine-making is more likely to be encountered by most wine-drinkers, even if they are not aware of it. Further, even people sceptical of the philosophy and ideas behind the biodynamic approach often will admit it makes interesting wines.

So what is biodynamics?

In short, and not completely inaccurately, biodynamic farming is like organic farming with a spiritual element added in. However, this is more accurately, a reversal of how things developed. Biodynamic farming as a movement predates organic farming, again considered as a conscious undertaking. Biodynamics dates to a series of lectures given by Rudolf Steiner in 1924, and published the following year as ‘Agriculture, a Course of Lectures’. It is also not quite accurate since, even leaving aside the spiritual aspect, biodynamic farming includes the use of a number of ‘preparations,’ used in homeopathic concentrations and expounded upon in Lectures 4 and 5, that are intended to help the process and the concentration of life and cosmic forces.

Steiner himself noted that the methods he advocates sounded crazy, but he was convinced that people would be convinced by the results: ‘As to the farm­ers — well, if they hear of these things from a fel­low-farmer, they will say, “What a pity he has sud­denly gone crazy!” Yes, they may say it the first time and the sec­ond time. But even­tu­ally — when the farmer sees a re­ally good re­sult, he will not feel a very easy con­science in re­ject­ing it out­right’ (Lecture 8). This is said to be the same with first hearing how biodynamic vineyards operate.

Biodynamic farming, however, is similar to organic farming, which most people will be more familiar with, since it eschews the use of most pesticides, artificial fertilizers, and so forth. As Goode and Harrop put in their book Authentic Wine biodynamics ‘is a different way of thinking that involves seeing the farm as a whole system, with a complex series of connectedness between the various components’ (p. 56). The connectedness is linked to concepts of ‘life force’, which is where things start to seem a bit unusual for most people, since life force is linked to the concept of ‘cosmic energy,’ which in turns leads us to both things like phases of the moon, and back to the preparations. I want to leave the preparations aside for the moment, and return to them later.

As a result of this systems approach to the vineyard, a biodynamic vineyard will often look like a vineyard being farmed sustainably. Animals are encouraged and often keep by the growers and various grasses and flowers are grown between the rows of vines. However, many activities in the life of the vineyard are carried out in accordance with phases of the moon, although every biodynamic grower I have talked to is above all pragmatic: weather conditions will trump moon cycles every time, if need be. 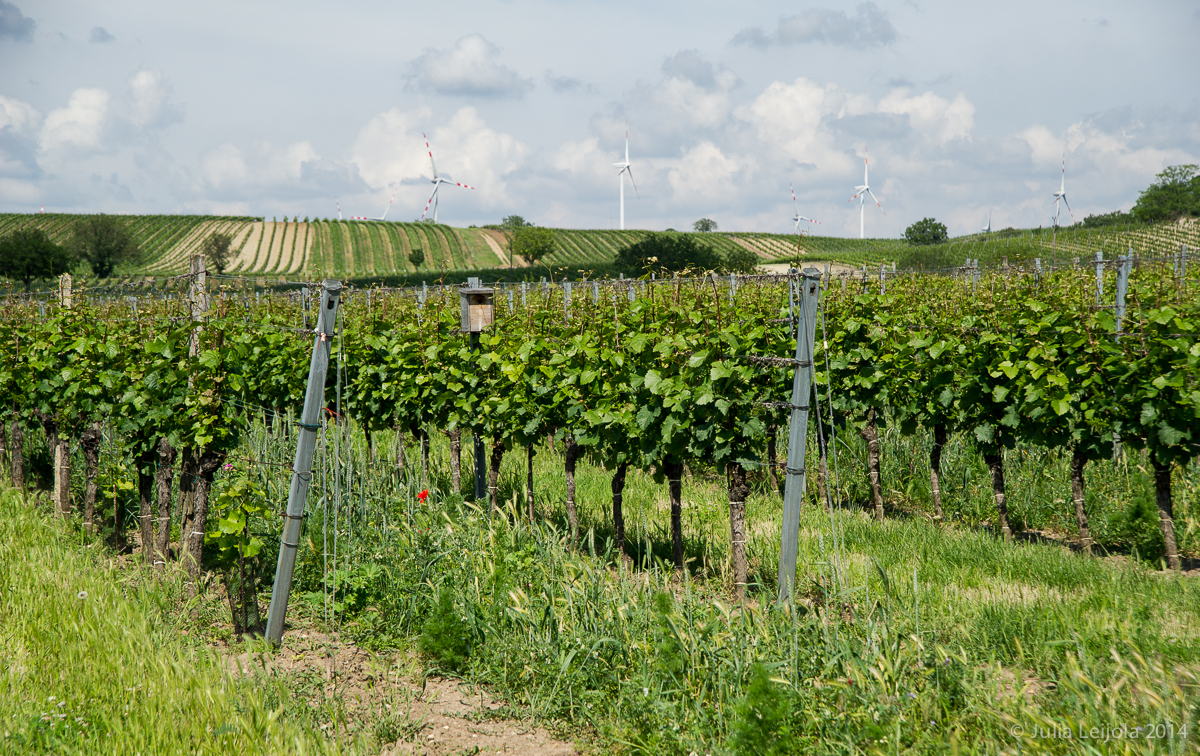 The biodynamic vineyards of Judith Beck, Göls, Austria. Note the flowers and grasses in between the rows of vines, and the birdhouse. Compare these particularly with the conventionally farmed vineyards on slopes visible in the background.
Photo by Julia Leijola.

To give a standard anthropological answer: ‘Yes and No.’ Or, if you prefer: ‘It’s complicated.’ As I’ve already noted, it is widely held that even people who have no use for the philosophy and some of the practices of biodynamics seem to admit that it leads to more complex, interesting wines. My own, very small scale and very informal tastings and queries among friends and colleagues seems to suggest the same, even when they do not know which wine is which. This might at first suggest that there is something to biodynamics. Thus ‘Yes’. This is where the ‘It’s complicated’ comes in. Studies do support the idea that biodynamic vineyards have healthier soil, with greater microbial diversity, for example, than conventionally worked vineyards. So too, however, do organic vineyards (see Goode and Harrop 2011, 63-64). There are one or two studies that suggest biodynamics has a greater impact on the soil than organics, but more studies seem to suggest that the two are more or less identical in terms of measurable impact. Hence, ‘No.’

So, what is going on? Leaving aside the not insignificant aspect of suggestion and expectation, one explanation – apart from scientifically-implausible biodynamics works – is perhaps to be found in the people who adopt biodynamics, in whole or in part. Put simply, biodynamic farming requires a lot of dedication and work. It also closes off some relatively easy treatments in the forms of modern pesticides and herbicides. To head down the biodynamic path then, requires a fair amount of commitment. It seems reasonable to assume, and I am by no means the first person to suggest this, that someone willing to go through all the trouble biodynamics entails is someone who is going to be paying greater attention to their grapes and wine-making anyway. Perhaps, from this perspective, biodynamics is not a cause of interesting wine-making, but a symptom.

The title of the post refers to some of the components used in the biodynamic preparations. I am not going to go into detail into each of the nine different ones Steiner talked about. A decent summary can be found in Britt and Per Karlsson’s Biodynamic, organic and natural winemaking (2014, 113-121). Given numbers 500-508, two are used in the soil, and the rest are sprayed. The point ‘is not merely to add sub­stances to it [manure, and through it, the soil], with the idea that it needs such and such sub­stances so as to give them to the plants. No, the point is that we should add liv­ing forces to it. The liv­ing forces are far more im­por­tant for the plant than the mere sub­stance-forces or sub­stances‘ (Lecture Five).

Some people who follow biodynamic principles, but who are not certified, seem to sometimes use variations. Two winemakers I talked to spoke of chamomile ‘tea’ for the plants, apparently rather than Preparation 503, which involves burying dried chamomile in intestines and burying them.

This is the part of biodynamics that invites the most scepticism. Preparation 500 is cow manure, buried in cow horns at one time of the year, gathered back up at another and then diluted in water, using a ‘dynamiser’, which stirs the water in particular ways. It is sprayed in small concentrations on the plants. The key here is the cow and its horns. Steiner writes: ‘The cow has horns in order to send into it­self the as­tral-ethe­real for­ma­tive pow­ers’ (Lecture Four). This principle is drawn upon in burying the cow horn. The horn helps concentrate the cosmic energy into the manure, vitalising it. As for the dung itself ‘it was not pri­mar­ily used to en­rich the or­gan­ism with ma­te­r­ialsub­stance. On the con­trary, it was ex­creted. Nev­er­the­less, it has been in­side the or­gan­ism and has thus been per­me­ated with an as­tral and ethe­real con­tent’ (Lecture Four).

Similarly, in Preparation 502, Yarrow is hung in a stag’s bladder from a tree facing the sun, and later buried and even later dug back up and processed. Yarrow itself is ‘a miraculous creation’ and ‘The stag is an an­i­mal most in­ti­mately re­lated, not so much to the Earth but to the Earth’s en­vi­ron­ment, i.e. to the Cos­mic in the Earth’s en­vi­ron­ment’ (Lecture Five). Its antlers are the opposite of a cow’s horns, not concentrating energy, but acting as ‘valves,’ allowing ‘intense communication with the surrounding world’ (Lecture Four).

If all of this is too much work – or cow horns and stag bladders are in short supply – preparations can be ordered from suppliers.

One of the things I hope to do with the project is look in more depth at how such ideas translate into daily practice and the taste of wine. It is one thing to talk about Steiner and his theories, or even to talk to winemakers who say they follow biodynamic principles faithfully. But it is quite another to spend more than a short visit with the same winemakers, to learn – and hopefully understand – their daily activities and rhythms, their enactments and embodiments of their philosophies. In short, to understand what the anthropologist Sherry Ortner once termed ‘real people doing real things’ (1984, 144).

Note on sources: There are, of course, good sources on biodynamics (and other aspects of wine and agriculture) on the web. I even use them myself. Here, though, perhaps largely as a legacy of the academic model, I tend to refer to printed sources.