One aspect of natural wine that I didn’t cover in my previous post on the topic is its relation to what is known as ‘typicity’ and the implications of this. Typicity ‘is of broad importance in defining what a wine from a region will be like’ (Farmer 2013, 156). In other words, typicity is about what a wine should and is expected to taste like. In France it is linked to the AOC system, and parallels hold elsewhere. Simply because a wine is grown in a particular region does not automatically grant the vintner the right to label it as being of a certain quality, or even necessarily from a certain region. There are regulations to follow and hurdles to overcome to even be allowed to claim on the label, for example, that a simple Burgundy wine is indeed from Burgundy. The rules vary by country, but for anything above a simple ‘Vin de France’ or ‘Tafelwein’ (in Germany and Austria), geographical restrictions, among others must be met. Often, restrictions on even the simplest wines include minimum must weight, such as in Austria and Germany, or yield per hectare. As one moves up the hierarchy of restrictedness (which, in the theory of the system, should correlate with quality) other factors also come into play. One of these is ‘typicity,’ which is determined usually by a tasting panel, who rules on whether or not the wine meets the expectations of a Burgundy, or a Chianti, whatever the internal ranking.

This explains the category of ‘super Tuscans,’ which themselves raise two important points. ‘Super Tuscans’ originated in the late 1960s, early 1970s as vintners in Tuscany (most famous for Chianti) grew grapes and made wines that did not fit the classification schemes for Chianti. As a result, in spite of being high-quality wines, and usually commanding corresponding prices, they could only call themselves ‘table wine’ (originally) or later IGP wines, which indicates the wines are from a particular region, but no more.

The first of the points thus is simply that the various classification systems of wine are arguably only of interest and importance if you are interested in typicity. Some vintners reject the classification system of their country precisely so they can experiment, or produce wines that otherwise would not be allowed. This also means that a ‘simpler’ or ‘lower’ level of classification doesn’t necessarily mean a poorer or cheaper wine.

The second point follows on from this, which is that while the issue of typicity is not restricted to natural wines, it is one they are quite likely to have to deal with. It is arguably the characteristics of natural wine that make it so interesting – the lack of filtering or fining, minimal intervention, and so forth – that mean it is quite likely to fall foul of the expectations of typicity. 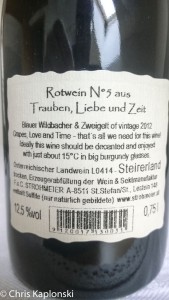 Note the classification, ‘Landwein’ in about the middle of the text.

While in Austria in September, 2014, Julia and I had the chance to interview Franz and Christine Strohmeier, who make natural wine in Steiermark, as well as to taste some of their wines. The wine, as the back label shows, is classed as ‘Landwein’, which requires a certain must weight, and that the wine comes from one region. There is no typicity attached. Yet the wine the Strohmeiers make is served at Noma in Copenhagen, recognised as one of the top restauran

ts in the world, and more often than not, voted the top restaurant over the past several years.

If there is a moral to this post, it is to recognise the implications of classification systems for wine, and recognising they have their many uses, they also have limitations, and you should not be afraid to explore wines with only ‘simpler’ classifications.