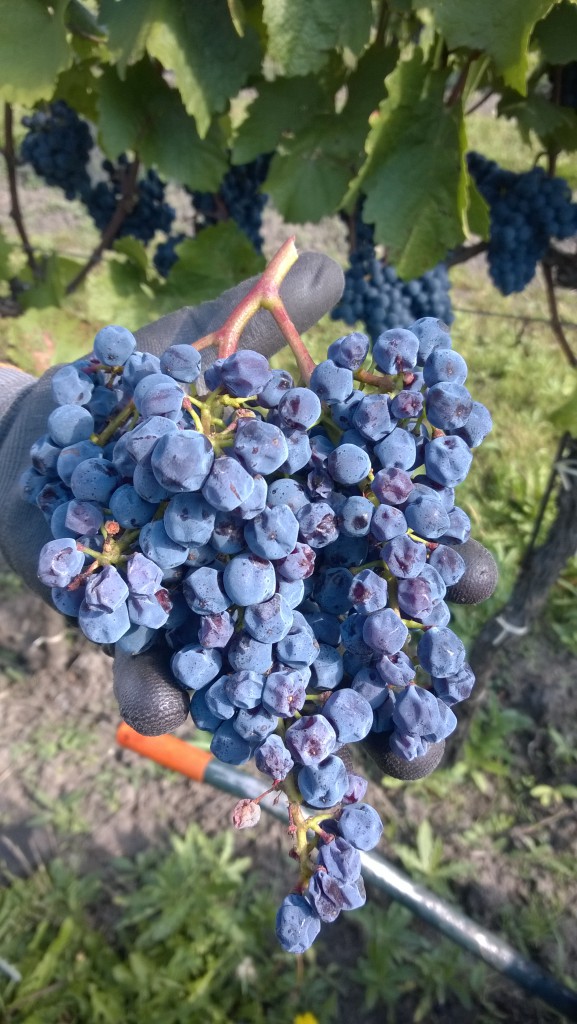 These are bad grapes. You don’t even have to taste them to know that. Just toss them on the ground. (Photo by Julia Leijola)

Analytically, one of the things that intrigues me most from our recent stint of fieldwork is the role of taste. I was interested to see the various roles taste plays in the harvest and selection. This was a fortuitous find, as the project is, after all, about taste. During our too-few days in Austria, taste kept cropping up in unexpected ways. Specifically, it often was used as an indicator of quality, both in picking and in selecting back in the cellar.

I’m still not sure I completely trust myself completely on picking grapes. ‘Pick only the ripe ones,’ we were told when we started. Most of the others you cut off the vine and leave on the ground. Several variations of unripe, or otherwise unsuitable, grapes were pointed out to us. Wrinkled ones, like in the accompanying photo, were easy. Ones that were too soft were not so bad. Ones that were too hard, were a bit more difficult. And then there were the ones that had hints of pink in them, also to be rejected. Those were the most difficult, as to the inexperienced eye, the dividing line between acceptable and unacceptable seemed all but invisible.

I thus spent a fair amount of time in the beginning, intently peering at a bunch of grapes before asking someone else, ‘Are these ok?’ Sometimes they’d just say Yes or No. But when they were feeling more expansive, they’d often come back to the same answer – taste them. That’s the surest way to know. They just tasted right – sweet, not too sour or acidic.

The same was true of the white grapes. Taste was the ultimate arbiter, it seemed, and perhaps resorted to more often since the colour gradations seemed – at least to me – to be even finer. This was particularly instructive. I was told to taste one bunch I had been debating about. It wasn’t just not sweet, it was downright awful. People would sometimes spit out grapes after tasting since they had made a decision. That bunch I spat to try to get rid of the taste. It didn’t help.

The resorting to tasting a bunch of grapes wasn’t just a trick to show the beginners. We may have resorted to it more often, but even the most experienced pickers would resort to tasting from time to time to make a decision.

The same was true again in the cellar, standing at the sorting table. Here grapes are again inspected and possibly rejected one last time. Tasting as a filter wasn’t quite as common, but it wasn’t absent either. I missed sorting one particularly problematic bunch of grapes, but Julia told me that there, some people tasted pretty much every bunch they rejected.

Perhaps less surprisingly, taste also plays a role elsewhere in the cellar. Technical tests are run – measurements are taken and recorded, but grape must at various stages is often tasted. It is drawn off fermenting tanks or scooped out of barrels. Wine glasses dot the cellar. Once, when we asked what someone was looking for in the taste, he said ‘to see if it tastes clean.’ He was tasting a sample of grape must we had been filtering. It certainly looked clean – clear, bright, jewel-like in the right light. It passed the taste test as well.

There is no brilliant analytic conclusion to this post. I’m still not sure how to fit the role of taste I encountered in the vineyard and cellar into my larger thinking on the project. But if I knew that, I probably wouldn’t need to continue the project. But it is something that is intriguing, and I think there is something more going on here than is immediately evident.

One of the aims of this blog is to introduce anthropology and wine, and use them as tools to understand each other. So, if you are looking for a point to this post it is simply one of observations, and by way of the observations, hopefully a bit of an insight into the sort of things anthropologists find interesting to think about and explore.