Pét Nat. It is short for pétillant naturel (naturally sparkling), a particular type of sparkling wine. I’ve only come across it in the last year or so, although I’ve found references on the web going back a few years earlier. It doesn’t seem to generate much coverage in the press, except for noting it’s a new trend, and apparently big with hipsters. But what is it? 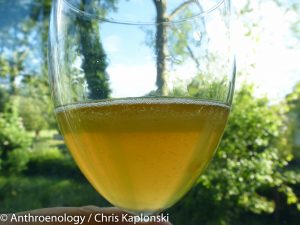 Pét Nat is wine that finishes fermenting in the bottle. It undergoes only a single fermentation (unlike the double fermentation of most sparkling wines). As the grape must is busy fermenting into wine, at some point, it gets bottled. It then finishes in the bottle. This means that the wine is sparkling, but it is also unfiltered and unfined. It’s cloudy, sometimes even with bits floating in it – see Figure 1, an Austrian wine. Most Pét Nat makers use wild yeast. The wine is under less pressure than other sparkling wines, and is equivalent to a zero dosage sparkling wine. So, while there is no need for Pét Nats to be natural wine, in my (admittedly limited) experience, they tend to be.

The technique behind Pét Nat is known as method ancestrale. Method ancestrale, as the name suggests, is said to be earliest form of making sparkling wine. It is still used to make some wines in Limoux, among others. Besides being an old method, it is said to be a very tricky one to do well, since it requires suspending the fermentation and then bottling the wine. 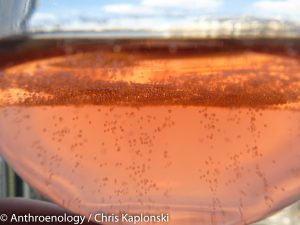 Things are a bit more confusing than it first appears. (Those of you who are unable to avoid puns might think that the issues becomes rather cloudy here.) Most Pét Nats I’ve come across has not been disgorged. Hence the cloudiness. Figure 2 – a methode ancestrale French wine that some also describe as a Pét Nat – has been disgorged. This isn’t that uncommon in wines made by the methode ancestrale. (See the technical information at Wine & Grapes U.) This will give you a clearer wine. The method, whether disgorged or not, also gives a lighter degree of carbonation. This is what pétillant means in the wine world, ‘lightly sparkling.’

There is one other thing worth noting before moving on to the important stuff. The closure. Most sparkling wine is closed with a champagne-style, or mushroom, cork. Pét Nat in contrast is almost (but not always) sealed with a crown cap, the sort of top you find on beer bottles (Figure 3).

Crown cap on a bottle of Pét Nat.

On to the important stuff. What does Pét Nat taste like? Friends describe the Austrian one I’ve served them (Fig. 1) as tasting like a wine version of cider, or apple-y champagne. I’d go with that. It’s also been described by them as ‘more-ish,’ another good description. It’s not a wine made for thinking about, but rather one for enjoying.

For those looking for something that might resemble a more traditional tasting note, I offer my semi-traditional notes on Mosse Moussamoussettes, Rosé, NV (Fig 4):

Very fine petiilance that fades relatively quickly. Herbal hints on the nose. Funky is a word people like to use, and I won’t disagree. Dry, in this particular bottle. Perhaps fading very slightly into the off-dry, but not in, say, a Kabinett sense. Roses, peach. Quaffable, not to think too much about. Fun.

With that in mind, track some Pét Nat down. It’s still a bit hard to fine, but places like Les Caves de Pyrene carry a nice selection, including ones from France, Austria, New Zealand and the UK. (Note: I have no links to Les Caves de Pyrene, apart from ordering wine from them.)