Due to irreconcilable differences. Or at least, that’s how I think of it. Since taking the WSET Diploma Unit 3 exam (aka The Big One) in June, when people asked how I did, I’d reply that I thought I’d pass, if it wasn’t a WSET exam. Alas, the comment turned out to be prophetic. I failed both parts of the exam. And did so rather decisively.

A brief recap: The tasting exam was of four flights of wines, 3 wines per flight. I passed one flight, but failed two and received a ‘fail unqualified’ on one. You a mark of 55 (out of 100) to pass. A ‘fail unqualified’ means you scored below 45. Then there were five theory questions. One was mandatory, and then you had to choose four from six possible ones. I failed the mandatory one, but expected that. I also failed three of the four optional ones, and passed one. The one I passed I thought I had a decent shot at getting a Merit on. That was based not just on how I thought I did, but also comparing it to grades from the practice questions I did. Ah, well.

I’ve spent the past few days thinking about this, and chatting with various friends and family members, to whom I’m grateful for putting up with me. In the end, I’ve decided, albeit not without some regret, that I’m not bothering with resits. I’m dropping my pursuit of the WSET Diploma. In terms of money, time and stress (not necessarily in the order of importance) it isn’t worth it anymore.

A not inconsiderable factor in the decision was the fact that I’ve self-funded this study. Not being in the wine trade, I have no company to pay for it. Leaving out the various books, which I may well have ended up buying anyway, I figure very roughly that between fees, commuting and wines to study for exams, I’ve spent more than £6000 to date. Assuming I’d pass all the exams on the next resit, I’d still need to spend over £500 just on registration fees, then factor in commuting from Cambridge to London, wines to study with, and so forth.  That would probably be a bare minimum of another £300. Given that, as I’ve documented here, WSET and the Less Social Half (the LSH of the subtitle, if you hadn’t sussed it out yet) of Anthroenology disagree on my ability to smell and taste wines, there’s no guarantee I’d pass the next time around.

There are other considerations as well. I started out doing the Diploma as part of the wider Anthroenology project. I wanted to learn how the wine trade trains people, or wants them to think. Since WSET presents itself as an unofficial industry standard, they were the logical choice. I’ve done that. I’ve done all the coursework, and sat all the exams at least once. I’ve even done their appeal process. I think I’ve covered all the bases in terms of my original goals. Actually getting a Diploma at the end would be icing on the cake in terms of research, but by no means actually necessary.

In fact, I think it has gotten to the point where working on the Diploma has taken valuable time away from the core concerns of the research – sustainability and taste. Taste, we know beyond a reasonable doubt, WSET is very normative about. Sustainability, and the ways winemakers are exploring it? WSET doesn’t cover it, and when topics like low-intervention or skin-contact wines have been brought up by students, they’ve been dismissed more or less out of hand by the tutors.

Finishing the Diploma would have accorded me certain bragging rights. I have great respect for my friends and classmates who have finished. At least one I know of personally is going to finish with a Merit. She deserves it. But in terms of my own work and research, it’s far from necessary. What Anthroenology brings to any conversation about wine, sustainability, and / or taste that is unique is the first part of our name – our anthropological sensibility – not the second. In doing what we do, the Diploma is irrelevant. As an aside, a good number of the winemakers we’ve talked to over the years in Austria had never heard of WSET. Remember it is, after all, designed for people in the wine trade (selling, marketing, etc.), not for people making wine.

I’ve also come to think over the past few days that in some ways, it’s hypocritical of me to care about the Diploma. Given my critiques of the whole WSET approach, why should I care if I can play their game or not.

Admittedly, not finishing the Diploma makes it easier to dismiss my critiques of WSET and its approach as sour grapes. If that’s how people want to view it, oh, well. I was critiquing them before I decided to stop, and the critiques were never relevant to the project. Plus, I take some comfort in knowing from both classmates and readings of this blog that my criticisms are shared at least in part by others.

I suppose you could say I’m a failure for dropping out of the Diploma. (I’d love to know the drop-out rate overall.) There’d be truth to that. For me, at least, it’s a particularly painful type of failure. Academics get used to failing – we have articles rejected from journals, get turned down for funding more often that we receive it. But this one is a self-inflicted defeat. I wasn’t forced to drop out – I decided it was the wiser choice. That doesn’t make it any easier.

It will be nice to go back to drinking wine without a voice at the back of my head saying ‘Are those tannins medium(+) or high?’ I’ll continue to think about wine, write my own tasting notes, and so forth. But it will be nice to be able to do so on my own terms, ones that reflect my own concerns.

So, yes, if you are wondering, I regret the decision I’ve made. But I’m more relieved by it than I regret it. That tells me I’ve made the right choice. 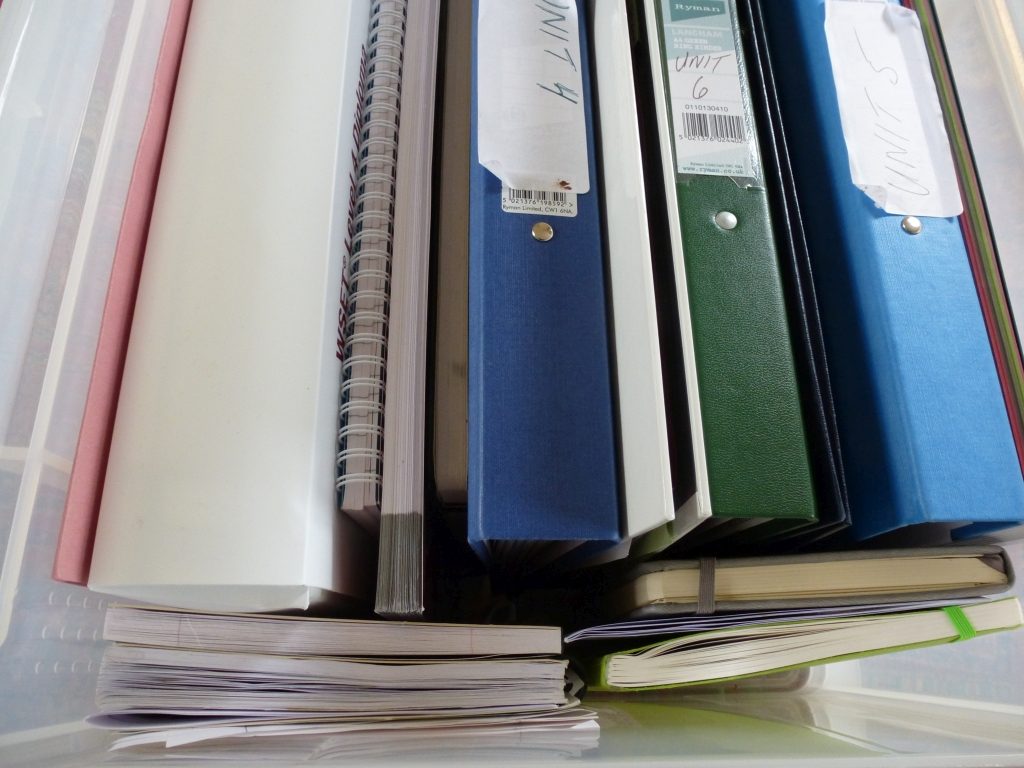 Some of the notebooks and material accumulated during my Diploma studies.