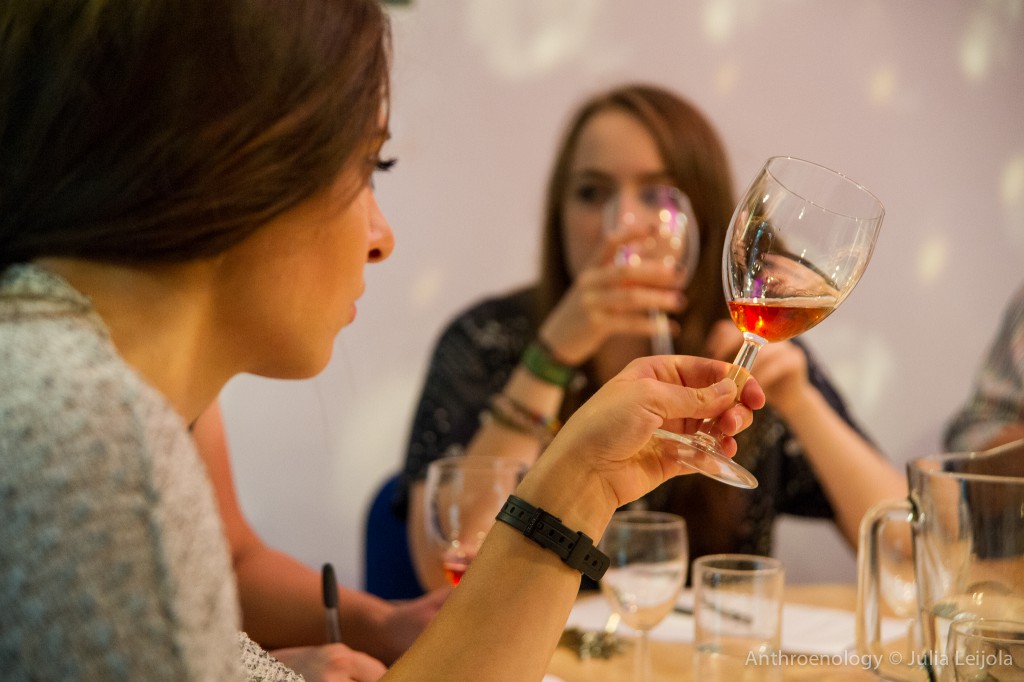 Sometimes it is. Or at least –ish. Often it isn’t, being more of a golden yellow, or amber, or some other colour, as the photo suggests. But the colour isn’t all that interesting, except for what it is indicative of.

So what is ‘orange wine’? In addition to not always being orange, it also isn’t made from oranges, as I’ve been asked more than once. Orange wine is, essentially, a white wine made in the manner of a red one. By this I mean that the grape must is left in contact with the skins after pressing, as is the case with red wines. The wines thus absorb some colour and tannins from the skins. This is what the colour is indicative of. It leads to a darker, more complex colour than you’d expect from a wine made more conventionally from the same grape. The wine in the picture is made from pinot grigio, a grape that often gives very light-coloured wines.

Orange wine is, however, more complicated than my first explanation. Some orange wines are left in contact with the skins for weeks, or even months. In red wine, this period is known as maceration, and usually lasts from a few days to a few weeks. I have come across some orange wines that have been through the process for three to six months, although this is rather unusual. Interestingly enough, skin contact for white wines is not unknown. Macération pelliculaire, as it is known (it is also known as ‘skin contact’) usually happens for a few hours, and at a reduced temperature, to help extract certain flavours (Bird 2010: 104-105). In this process, however, the aim is to extract flavours, not the various other components in skins, such as polyphenols, that would give the white wine more traits associated with red wine. This, however, is exactly what happens with orange wine.

Why do people make orange wine? It is a technique that is said to go back thousands of years, and was practiced in the regions that are now Armenia and Georgia. It was resurrected in the 1990s, largely through the efforts of a few wine-makers in the Friuli of Italy, and in particular Josko Gravner. He is said to have become dissatisfied with the wines he was making, and starting experimenting with other, older techniques. From there, the movement hasn’t quite exploded, but it has taken off. Orange wines are still a niche wine, but probably not a fad, if it has lasted twenty years or so already.

Orange wines are often coupled with the natural wine movement, but this isn’t a necessary connection. I did notice, however, that many of the Austrian wine makers at the recent RAW Fair in London made an orange wine. As I only talked to the Austrian wine makers, I have no idea if the same held for other regions, but I suspect so. There is no official definition of orange wines (which some, like Gravner, prefer to call ‘amber wines’). That means there is no requirements, or even agreement that I’m aware of, on how the wine is processed post-skin contact, or how the grapes are grown. The defining characteristic is the skin contact. Nonetheless, I think there are similar philosophical underpinnings between orange and natural wines. Both involve a questioning or rejection of certain trends in modern wine making, and a reclamation of something seen to be ‘traditional’. Whether it is, or isn’t, is, like the vast majority of appeals to tradition or nature, irrelevant. You can find it often coupled with other revived or borrowed techniques – such as burying the wine in amphorae or similar to ferment. And, of course, once the wine achieves some notice, others are eager to join – whether to experiment, for philosophical reasons, or simply because it is a way to make money, particularly since orange wines often command a premium.

I’ve intentionally avoiding what orange wine tastes like to encourage you to go out, find some, and try it for yourself. All I’ll say is what pretty much anyone would tell you: They’re different and they’re hard to ignore once you know of them. I’ve really liked some I’ve tried, disliked others, and found I’m indifferent to yet others. In that way, orange wine is just like any other.