While many, if not most, of the posts on this blog have been about wine, in some shape or form, this one is about the first part of our name: the Anthro-, which is from ‘anthropology’. It occurred to me that I have never explained for those unfamiliar with it, what exactly anthropological fieldwork is. As Julia and I have done two short periods of fieldwork earlier this autumn, I thought this was a good time to address this lacuna. What I’m going to cover here is a very quick and dirty description of fieldwork, and in particular, a research method known as participant-observation.

Before I get to that, a note to anthropologists and other interested parties. This is a quick and dirty description. In other words, I’m going to simplify, only touch upon in passing or ignore various debates and issues, and otherwise probably leave some of you thinking ‘But what about this? And why didn’t he mention that?’ I’m probably aware of them, and may come back to them in the future.

Fieldwork is what anthropology is, or claims to be, about. If anthropology is the study of people, what is said to separate it from other disciplines like sociology, political science or psychology is our methodological approach. We aim to understand whatever it is we are interested in – religion, politics, concepts of the family, or wine – through a close engagement with people’s actually-lived existences. We may well conduct surveys, or draw upon postings on Facebook to provide some sorts of information. I’ve personally worked for years in the historical archives in Mongolia, but still see myself as an anthropologist, not a historian. In the end, we feel the best way to actually understand people is to live with them, and as far as possible, do the things they do. Hence, we both observe and participate, as much as possible.

Social anthropology’s founding myth is that the method was discovered / invented / developed by Bronislaw Malinowski in the early 20th century. He described what he called a ‘good condition of work,’ by which he meant ‘cutting oneself off from the company of other white men, [sic] and remaining in as close contact with the natives as possible’ (Malinowski 2012, p. 70). It was only through such an approach, he argued, that one could get close to people’s actual practices and beliefs. I call this a founding myth because Malinowski wasn’t the only person doing this at the time, nor even the first. But he, for various reasons, gets the credit.

To a large extent, this is what we still do today, at least in theory. We tend to send our PhD students out for a year or two to some location to get to know the people and research their topic. Post- PhD, it gets harder, as jobs, obligations and life in general make it harder to get away for such long stretches of time. During our time in the field, we live and work with people, and in doing so, hopefully find answers to whatever it is we are interested in. We become part of their life, and doing so, become privy to things we would probably never know, or even know about, if we just showed up for a few hours. Another, less charitable, way of putting this is that we become friends with people, and then exploit that friendship for knowledge and insight.

Let me illustrate this with a story. In 1997, I was doing fieldwork in Mongolia. One weekend, I was hanging out in the kitchen of some friends, chatting with the wife as she prepared some food. One of the couple’s friends stopped by for a bit, and the husband went off and chatted with the guest. After the guest left, he came back into the kitchen with a story. ‘So-and-So,’ he said, ‘wanted to know why there was a foreigner sitting in the kitchen, and not being treated as a guest.’ A guest should have been hosted in the living room, with tea (and/or alcohol) and snacks served. My friend replied ‘Oh, that’s not a foreigner, that’s just Chris.’ The point here is that although I was obviously a foreigner, I had also become an accepted part of their life. That in many ways is the anthropological ideal. Hopefully, in becoming part of the scenery, so to speak, people will open up to us more, and we gain greater insight into how they live and think.

Anthropologists may well return to the same place time and again over the course of their career. There was a span of 20 years between my first and last visits to Mongolia. I’ve lost count, but if you added up the time I spent in Mongolia over those twenty years, I think it is in the neighbourhood of 4 years total, perhaps a little more. Others may make only one or two trips to a place, and then move on to a new topic. 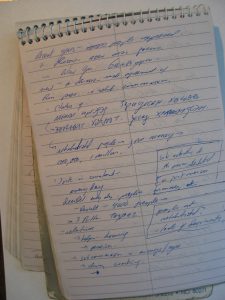 A page of ‘raw’ fieldnotes from Mongolia.

Times and things change. While this is still in many ways the ideal, it isn’t always possible or practical. Plus things have changed greatly in the last 100 years. I mean not just things like the internet, which offers new ways of communicating, but also ways of doing and thinking about fieldwork. Malinowski didn’t worry much, if at all, about consent. He just turned up. We try to be more sensitive about explaining to people what we are doing and why. We also try to be better about engaging with people – not just taking, but working with and giving back. We also recognise fieldwork is not and will never be objective. There have been numerous theoretical stances and arguments over the years, but two key ones are Geertz’s (1973) interpretative anthropology, and for both good and bad, the postmodern moment (see Clifford and Marcus 1986). I don’t have space to go into these here, but may in the future. The debate also continues, of course.

Who we are (our positionality, as we sometimes say) influences what we learn. Julia, as a younger, more outgoing anthropologist than I, and who is a woman, gets different responses from people than I do. Apparently I tend to intimidate and/or confuse people, since I’m not very good at small talk. (Yes, a near-fatal flaw for fieldwork.) Both of us are white, and that affects how people act towards and around us as well. For a decent overview of  both the history of fieldwork and some of the issues it raises, see Sluka and Robben’s introduction to their edited volume (2012).

How does this translate into what Julia and I did earlier this year? Well, it does and it doesn’t. In September, we took a little over a week to travel around Austria and chat with some low-intervention wine makers. We spent between, say, an hour and four hours talking to various people. This obviously wasn’t what Malinowski had in mind. These were all people that at least I had met before, however briefly. So they had some idea what we and our research was about. We also knew enough to be able to demonstrate we understood at least the general issues of low-intervention winemaking, and wanted to know what they thought. In many ways, this was exploratory. We hope and plan to revisit these people over the coming months and years, hopefully for longer stretches of time, to gain a deeper understanding of what is going on. Everyone we talked to seemed eager – or at least willing – to have us come back and spend more time and learn more about their philosophy and approach to winemaking. Even so, these brief visits were very helpful, and the sum total was more than the individual parts. It helped us to start to build a larger picture of the low-intervention wine community, not just one producer.

In the UK, we spent a few days helping with the harvest. Again, this was very exploratory. It was about establishing contacts as much, if not more, than anything else. Just three days in the fields and winery aren’t enough, but still better than nothing. A key point about fieldwork should be pointed out here. We had spent a week in September 2015 helping with the harvest and cellar work in Austria. The brief time in the UK was enough to elicit some comparisons, which again help with the larger picture. Even standing in the rain, stripping leaves and unripe bunches off of vines was much more relaxing than the harvest in Austria. Again, the result was more informative and productive than it might seem from a bare recitation of the facts. That’s true of most fieldwork as well – what one learns isn’t always (ever?) reducible to documentation, however many notes we may write about it.

I am sure as soon as I post this, I’ll think of things I should have said, or clarifications I should have made. I’ll be tempted to go back and edit it. But I won’t. Feel free to get in touch with comments, complaints or even congratulations. But this of this much like Anthroenology’s recent fieldwork: it lays the groundwork for future discussions and learning, whatever its own faults and failures.

I have cited the version of Malinowski that is found in Robben and Sluka’s edited volume, Ethnographic fieldwork: an anthropological reader, for the sake of (my) convenience. Interested readers are encouraged to seek out the original, as well as Malinowski’s diaries (cited below), which offer a fascinating glimpse into the man behind the method.

Malinowski, B. 1967 A diary in the strict sense of the term. Stanford, Stanford University Press.